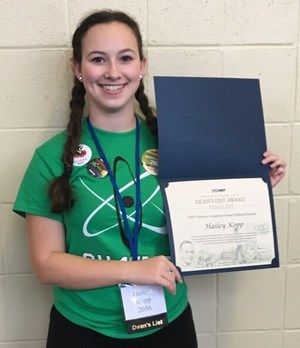 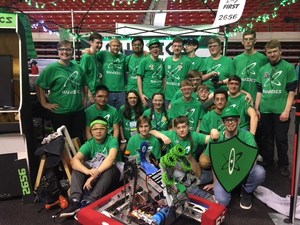 Gateway's FIRST Robotics Competition team, Quasics / 2656, took the field for our 11th Regional competition!
During the Awards Ceremony, Quasics was called down to the field to receive the Team Spirit Award!  This was our first judged award in team history.  Team members ran the high-five line and accepted the trophy and plaque.  And that's not all!  A short while later the FRC Dean's List Award Finalists were to be announced, and the first name they called was our very own Hailey Kopp!!  Hailey is the 4th Quasics team member in a row to be named a Dean's List Finalist, after GHS alumni Kate Heasley and senior Ebru Lider (twice!) in our FTC program.  Hailey will be invited to the FIRST Championship in April to be judged against ~100 other Finalists from all over the world for the official FIRST Dean's List.
On the field, our Regional Drive Team and our robot (Katherine - named after NASA legend Katherine Johnson) played an amazing tournament of FIRST Power Up!  We were able to score Power Cubes in both our Alliance Switch and the opposing Switch, play some stout defense, and put on a master class at the Exchange window!  Our record was 4-5-0, good for rank #33 out of the 52 teams present.  When the Alliance Selection draft came around, our number was called by the #4 Alliance captain to round out the 3-team Alliance.  Our partners were both from the great state of New York - FIRST Teams 3171 (HURRICANES) and 870 (Team R.I.C.E.).  Our Alliance battled hard against an outstanding #5 Alliance, playing into a Game 3 tiebreaker before being ousted from the tournament.
Other team members, team coaches, volunteers, and Judges alike stopped me throughout the Regional to comment on how good our team looked!